They intend to challenge Staples Center and other big arenas in the L.A. region by turning the faded Inglewood facility into a ‘world-class’ concert hall. 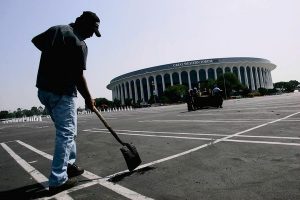 MSG, the new owner of the Forum, has paid $23.5 million for the facility and will start work this year on a $50-million renovation. The makeover is intended to turn the Forum into a top-flight concert hall and will take at least a year. Above, a worker fills potholes in the Forum’s parking lot in 2005. (Genaro Molina, Los Angeles Times / July 7, 2005)

In its glory days, the Forum was Southern California’s preeminent entertainment venue, a behemoth with Roman columns where adoring fans came to see the likes of Wilt Chamberlain, Wayne Gretzky and Bob Dylan.

But the famous round building fell on hard times. The Los Angeles Lakers and Kings moved downtown. Other venues in up-and-coming neighborhoods came along to nab the concert business. And, in the end, the Forum was bought by the Faithful Central Bible Church and all but forgotten.

Now, the owners of Madison Square Garden have come to the rescue with an ambitious plan to turn the faded Forum into a juggernaut. The East Coasters are looking to challenge the region’s big arenas, including Staples Center and its owner, the politically connected AEG.

MSG, as the company is known, has paid $23.5 million for the Forum and will start work this year on a $50-million renovation. Details are to be released in the fall, but the makeover is intended to turn the Forum into a top-flight concert hall and will take at least a year, President Hank Ratner said. 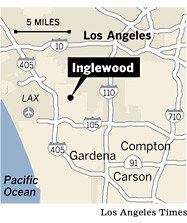 “The addition of the Forum is a perfect complement to the Madison Square Garden arena — it now allows us to have world-class venues in both New York and Los Angeles, linking the top two entertainment markets in the country,” he said.

A revitalized Forum would provide an economic lift to its Inglewood neighborhood. But it faces entrenched competition from the region’s other entertainment hot spots amid a challenging climate in the concert business.

The owners of Staples Center said they don’t fear a rivalry with the East Coast impresarios. They were quick to raise questions about the security of the neighborhood surrounding the Forum and dismissed it as a “class B” venue.

“We are very certain of our customer experience, their safety and the vibrancy of our campus,” said Tim Leiweke, president of Los Angeles-based AEG. “We are going to vigorously protect our own town.”

MSG brings a New York swagger to the task of reigniting the Forum. At Madison Square Garden, which MSG calls “The World’s Most Famous Arena,” the company is in the midst of a $1-billion upgrade, Ratner said.

The company earlier renovated New York’s 83-year-old Beacon Theatre and famed Radio City Music Hall. It also owns the venerable Chicago Theatre and is the booker for the historic Wang Theatre in Boston.

MSG, the new owner of the Forum, has paid $23.5 million for the facility and will start work this year on a $50-million renovation. The makeover is intended to turn the Forum into a top-flight concert hall and will take at least a year. Above, a worker fills potholes in the Forum’s parking lot in 2005. (Genaro Molina, Los Angeles Times / July 7, 2005)

“We will bring the same attention to detail to our renovation of the Forum, resulting in a world-class venue that will be the place for music in Los Angeles,” said Ratner, whose company has worked since late 2010 to wrap up the Forum deal, delayed by the intricacies of aligning business and political interests.

Leaders of Faithful Central Bible Church had hoped to use the Forum for its services and to build a family entertainment center that would generate jobs, but the operation became a financial albatross. Senior pastor Kenneth C. Ulmer said MSG had assured the church about “having a positive impact on our community.”

A Forum comeback would be a financial and psychological boost for Inglewood, which suffered when its pro sports teams moved out in 1999, Mayor James T. Butts said.

“When the Kings and Lakers departed for Staples, it was a crushing economic blow and a big blow to community pride,” he said. The city lost annual income of $800,000 from property, ticket and other taxes, along with the money that Forum visitors spent with local merchants.

MSG has guaranteed Inglewood that it will receive a minimum of $675,000 in ticket, parking and concession taxes annually from the Forum, a number based on the sale of 300,000 tickets. If sales fall below that number, MSG must pay Inglewood the difference.

For its part, Inglewood will give MSG an $18-million commercial rehabilitation loan — with strings attached. If MSG doesn’t spend the promised $50 million on Forum improvements, it won’t get the $18 million.

News of the Forum’s return has boosted long-shelved plans by another developer for a $2-billion real estate project that would replace the nearby Hollywood Park racetrack with a large planned community, Butts said.

Work on that project, called Hollywood Park Tomorrow, will begin early next year, he said. The community is to include 3,000 residential units, stores, theaters, restaurants, a hotel and a casino.

MSG’s investment comes at a challenging time in the concert business, said Gary Bongiovanni, editor of the industry-tracking publication Pollstar.

“Anecdotally, it appears the overall volume of shows is down from last year,” he said. “Everybody is trying to be a little more conservative.”

One advantage Bongiovanni sees for the Forum against its downtown L.A. competitor is that Staples Center has many nights committed to professional basketball and hockey.

“Staples has so many sports tenants that it’s very difficult to get in there and have a concert,” he said.

AEG’s Leiweke said Staples is booked for up to 250 events a year, most of them athletic contests. It hosts up to 40 concerts a year and promotes about half of them through its live entertainment division.

But the Forum has its charms, said Jim Guerinot, who manages musical acts including Gwen Stefani and No Doubt, the Offspring and Nine Inch Nails.

“The Forum was built at a time pre-luxury box, so it’s positively cozy compared to most major arenas these days,” Guerinot said. Its wide-open calendar will also make it attractive to those in the music business.

“You need to find a place that’s available,” he said, “and the Forum is a major arena in the No. 2 market in the country.”

Many of the top performers from the 1960s to the 1990s played at the Forum, including the Rolling Stones, the Jackson Five, Madonna, Van Halen, the Foo Fighters and Coldplay.

“When some of today’s artists were kids they would go see concerts at the Forum, the marquee venue in Los Angeles County,” Brooks said. “It’s an aspirational mood that they would want to come back. The Forum’s got rock ‘n’ roll spirit.”